After the initial shock of victory and inevitable despair of realizing I’d only crossed the first hurdle, I was in the business of wanting to check out the remaining competition. GG had already cleaned house against ‘25 Tanks’ (for the record, I hate stupid names. This is one of those), R3M1X was apparently done within the first seven minutes, which might have made the hair on my arms stand. Though, as I understood it, that result was due only in part to his immense skill and the rest of it was chalked up to his opponent being an absolute pushover. I caught the last few seconds of Skullfoot’s win over Drops. It seemed like a solid victory, so Perry would have to be careful. As GG had warned me, M-80 apparently played a strong Commando Raptor, because he’d obliterated Flickersnitch. I knew this not because I witnessed the decimation, but because they left the statistics screen idle after the match, and M-80 was recorded to have dealt nearly twice as much Damage Debt. Longsword lost to Oopsiedaisy without luster, and Carlos took a smooth two-set win over Nuke’em. I figured out Longsword was the girl Jordan and Comet had been talking to when we first arrived, and Flickersnitch was the kid who played a money match with Davis. Both of them were down and out.

The projected roster modified to reflect all of these changes and our little band of anarchists looked over the results. 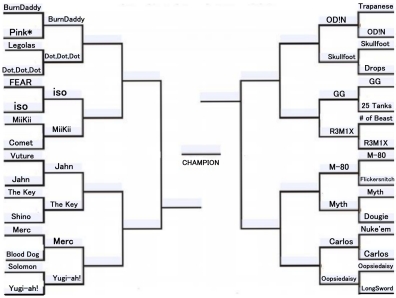 I clenched Perry’s shoulder and rattled him a little, “You turd,” I shook harder, “I almost lost because of you!”

Comet giggled, “You both did great.”

Perry was playfully indignant, “Because of me? Oh you mean my glorious battle cry of victory? Get used to it, you’ll be hearing that a lot.”

“Nice spunk,” Jordan rubbed a finger along the end of his nose, “Comet’s right, though. They might not have been pretty wins, but you both pulled through. Perry made a dramatic comeback and Joel adapted like a pro.”

“Well,” I countered, “Except the second set.”

Jordan didn’t even throw me a bone, “Except the second set.”

At least he was honest.

“I’d played against that Trapanese guy during friendlies. He was pretty good. I don’t know anything about your next opponent, though.”

Perry nodded, “I watched a decent chunk of his game. He was running Lynx, just like iso.”

“Not half as good as iso,” GG said, transfixed on the screen.

With half of the competitors eliminated, the number of available stations reached a fitting number. I was glad some people seemed to be sticking around for friendlies after the tournament ended. That way I’d have a chance to practice against some of the players I would never get to face in the competition.

I really wanted to step in the ring with iso, even if it meant I’d be reduced to porridge.
A part of me was sad that I had to play at the same time as everybody else. Honestly, sometimes it was more fun simply watching, but it couldn’t be helped.

No rest for the weary, our Tournament Organizer (T.O.) began delegating players to their respective stations for the next match-ups.

I was at the furthest station, with Jordan and Dot,Dot,Dot bunkering down in the adjacent. I plugged in my controller and input my ‘Myth’ tag. M-80 showed up and immediately addressed me with a handshake. Unlike Dougie, M-80 was much easier to label as a gamer. Lazily drawn hair, glasses, dirty white shirt, and thin as a nail, kind of like me. He took a seat after plugging in his own controller, “How you doing, guy?”

He shrugged, “Just because. I don’t know, I just am. I get excited really easily. Also, I watched some of your last match, you seem pretty good.”

“I guess we’ll find out how good in a couple of minutes.”

“Ha,” M-80 established his tag in the game and selected Commando Raptor, “Nervous? Do you come to these tournaments a lot? I don’t think I’ve ever seen you before.”

My hands opened as if I were carrying a large tray, “Nope, but I’m hoping to make a habit of it. Just joined a crew.”

“Burndaddy here,” I nodded sideways to Jordan at the next station, but he wasn’t paying attention, “He’s our captain. The Riotwings.”

“Nice. Crews are great, I’m glad you were able to find one.”

I chuckled, “Nice TwitchPlaysPokemon reference. Me and my friend Perry refer to that event all of the time. Who’s is in your crew?”

M-80 pressed start, moving us into the stage selection screen, “You can have first pick on stages. Um, well, half of my crew isn’t here today, but I’m with MiiKii, Oopsiedaisy and R3M1X.”

My tongue abandoned ship into my throat. This motherfricker trains with R3M1X? The guy who’s got GG all in a fuss? Great.

Not having an opportunity to see his playstyle, I opted to a stage with a lot of platforms so I could work my air-game hard. It was a nice default for me to work with. Unfortunately, I’d seen some good high-level C.Raptor players. They were pretty solid air combatants as well, but really shined when planted on the ground. He’s a super flashy character with a gallery of dramatic moves. I’d never actually played his origin game, simply titled Raptor Unit, but I knew it was pretty over-the-top. Commando Raptor and his teammates must hunt down creatures which eat these things called sun crystals. Whatever. The point is, apparently there’s a lot of slapstick humor and things blowing up needlessly all of the time, which sounds awesome.

Two of Raptor’s moves in particular have garnered infamy in the Anarchy forums. His forward-air, if landed properly, deals an excessive amount of knockback and even makes the screen stagger slightly. Thus it has been communally dubbed the Lizard Laser, even though it’s technically a double drop-kick. The other comes with its own name, his neutral-special, the infamous Genji Fist. So listen to this. Genji Fist takes a solid second of wind-up after being initiated before it can actually make contact, so it’s incredibly easy to avoid. If it connects, it’s a bad day buffet, but that’s not going to happen against most competent opponents. This one is easy to quote, as the character literally yells “Genji Fist” with a Japanese sling as he releases the technique.

So basically, if I ever let M-80 land a Genji Fist, I was opening myself to the ridicule of all my peers, especially since Brave is considered a fast character and can easily avoid such a telegraphed move.

“Praise Helix.” He settled into form, back slouching, eyes making like twin lighting upon the game.

Seriously, if you’ve never heard of TwitchPlaysPokemon, google that crap. For all intents and purposes, it was a landmark in the annals of internet history, and you’re going to hear me talk about it a decent amount during this retelling, so you may as well get it over with.

M-80’s combo game was real. He immediately charged, pulled off a pivot-grapple, twisted that into a down-thrown to neutral-air combo, fast-fell past me and up-bustered my character into a whopping 52DD out the gate.

He wasn’t even giving me time to breathe. But I eventually started reclaiming my nerves after landing a successful counter-attack. Old habits die hard, it seems. Now thoroughly intimidated, I immediately fell into the tendency of abusing this ability, which gave M-80 a floodgate of openings in which to punish my idiocy should I misread his actions. Which I did.

I was completely out of my league. I’d lost my first stock and was quickly losing hope. Before long I was two stocks down and my fingers had become little more than nubs of chalk.

Swallowing through a dry throat, I decided it best to die with honor. I wouldn’t just roll over for this guy. So as it were, I cranked it up to the eleventh, as the old trope goes. I managed to anticipate his movements in time to pull off a gorgeous trump and claim his stock, but all of the glory burned away when he trumped me just as badly twenty seconds later, stealing the set.

I leaned back, eyes wide, “Goodness.”

“Your pick of stages again,” M-80 said before addressing somebody who’d come up on his left. But I was too busy having my mind blown and cleaning up the mess. Cycling through all of my options and strategies, I tried to think of anything I could do, and came up with a handful of empty dreams. I thought back to Styx, the Brave player who’d won the very first Western Grand Rally. Most aspiring Brave enthusiasts tried to mimic his playstyle with laughable success. I mean, they were able to get a hold of the concepts, but his execution was otherworldly. Technically, I used Styx’s playstyle, but he was a god, one of the original Anarchy Sovereign. Comparatively, I was a peon trying to kill pigeons with a shovel.

Still, I racked my brain for something, anything that might help.

Not wanting to waste time, I selected the next stage and braced for the worst.

It was hard not to give him a sardonic expression, “Of course I do.”

What was that supposed to mean? Didn’t matter, needed to focus. Focus didn’t matter, he’d already taken a stock.

Fury boiled me through my core and back. No. It was not going to be this easy for him. I could not let that happen.

I abandoned all of my natural conventions with Brave, focused on being dodgey, and capitalized on openings in my opponent’s pressure. But that pressure was crazy, like the furthest reaches of a black hole, reducing all to naught.

My second stock was taken when M-80 Lizard Laser’d me off the stage, into the corner of the stage, and blasted me at an acute angle into oblivion.

Though I doubt anybody would say I didn’t fight valiantly, I was hopelessly outmatched. I lost the third stock and the set when M-80 ran me through a gauntlet of combos and gracefully grappled me into an up-air for the win. The only consolation I received was that I’d avoided his only attempted Genji Fist, but that was no more remarkable than a grown man having the wisdom to not walk blindfolded through traffic.

I was out of the tournament before even making quarter-finals, “Sweet Helix,” I said, “Good game.”

“Hey now. Language,” M-80 smiled and started wrapping up his controller, “Good games to you, too.”

“You don’t actually believe that,” I simmered.

“What was that you said about how I ‘need something more’?”

M-80 looked at me, amused. Eventually he dropped his hand when it was clear I wasn’t going to take it, “Aspire for more than to just be good at the game. There are more reasons for being here,” he openly gestured to the dimly lit room full of bystanders and competitors, “Than mere improvement.”

“Maybe now that you’re out of the tournament, you’ll be able to see for yourself,” he lifted his hand again. I took it, still sullen.

“I look forward to facing you in the next tournament,” he said, turning away, “Helix guide you.”